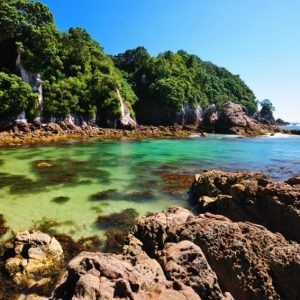 Six kilometres north of Whangamata and a right turn off the main Coromandel highway leads you to the hidden gem of Onemana. As you enter you’re greeted with an expansive view of the  sea and a glimpse of off-shore islands. Once you reach the foreshore the bay is revealed – lovely golden sands and a curving crescent shaped beach. Fringed at the south end by an impressive sweep of pohutukawa trees curving down from the clifftop to randomly strewn rocks, Onemana is a secret gem.

At the other end of the crescent more pohutukawas and a large rocky area provide the perfect spot for snorkeling.

It is from this particular bay that the off-shore islands – the Slipper group (Slipper, Penguin and Rabbit islands), the Aldermen Islands and Mayor Island – appear from a particularly appealing perspective.

The scene is complete with a small waterfall tumbling from the cliffs towards the northern end of the beach and a fresh water stream piped through from the hills, which flows into the sea. Between this and the grassy reserve is a small native seabird breeding area – much smaller and less official than the beautiful and extensive one on the Wharekawa sandspit at Opoutere, but nevertheless hosting two or three pairs of oystercatchers, many terns and seagulls and two or three pairs of New Zealand dotterel.